I worked with Coach Aguilar at Texas A & M-Kingsville, and he is one of the finest teachers of QB fundamentals in the business. I have been around many QB coaches both at major colleges and in the NFL and he is everybit as good, if not better in his approach and teachings. His attention to detail and his emphasis on fundamentals are critical to the development of young QB’s. Most of the time when a kid fails playing QB, it is not because he lacks ability, it is because he lacks fundamentals. The fundamentals you learn at Coach Aguilar’s camp will be something that you carry through your Junior High, HS, College and Professional playing experiences. I have absolutely no reservations about recommending his camp because I know that when a kid leaves, he is going to be fundamentally better and that is going to stay with that young man if he works on the principles that Coach Aguilar and his staff have taught.

Many things have crossed my mind, going back to my sophomore year. He took me as a little-skinny 15 year old. He taught me the value of work ethic and the determination to succeed. He took a real interest in developing me as both a Quarterback and a leader. I still take that hard work ethic and determination with me. I still think that’s the only way to approach things. I know first hand that he gives the greatest attention to detail. He instills that desire to be the best and for his Quarterbacks to be the best whether it’s in football or in life. It should be a great honor for young kids to take advantage of his camp. He shares his knowledge and offers his expertise. The ones who show up will find out what a real camp is.

I was the offensive line coach at Texas A&M-Kingsville before I was hired by the Philadelphia Eagles. It was then that I worked with Coach Aguilar. There are very few coaches gifted in the ability to coach the position of Quarterback. Over the years, Coach Aguilar has trained so many to be excellent Quarterbacks that have gone on to play at the next level. He has positioned himself as one of the best teachers of QB fundamentals in the profession.

He has developed a proven successful method of teaching and training Quarterbacks that get him very notable results. He is a professional that demands commitment and hard work and he is a technician in the art of throwing the football correctly. His knowledge of training mechanics, as well as so many of the little things we take for granted are simply awesome! The Alamo City Quarterback Camp is a WORKING CAMP, which is a true reflection of what Coach Aguilar is so much about. His camp caters to Quarterbacks only, and embraces improving their proficiency with thorough and in-depth fundamentals.

I have never come across a coach with the gift and passion for coaching Quarterbacks that Coach Aguilar possesses. He is truly dedicated to his craft and coaches Quarterbacks with a sense of necessity. In my opinion, he is among the best Quarterback coaches there is today. I wholeheartedly recommend the Alamo City Quarterback Camp to every QB who wants to maximize his potential. The quality of instruction that Quarterbacks will receive is second to none.

He is, without a doubt, the Best Trainer of Quarterbacks that I have ever seen. He spent countless hours, figuring out a way to make our Quarterbacks better. He spent a lot of time in meetings with them, covering the smallest detail. I don’t know of anybody more passionate about their job than Daniel Aguilar is in Training Quarterbacks.

I recall Aguilar’s thoroughness as a Quarterback Coach. He was a perfectionist in respect to Quarterback mechanics. He was highly demanding. Preparation was absolutely everything to him. He would never allow the Quarterbacks to do less than their best. Having Coach Aguilar here at Texas A&M-Kingsville … was a tremendous blessing for us.

Jim Streety has worked with many outstanding coaches during his long, stellar career as a high school football coach. That’s why his lofty praise of Madison assistant Coach Daniel Aguilar, who has been on Streety’s staff since 2008, is noteworthy. Called the “horse whisperer” by Streety because of his soft-spoken nature on and off the field, Aguilar coaches the Mavericks’ Quarterbacks with a steady hand and an eye on the smallest details. “Maybe Aguilar should be nicknamed the ‘Quarterback Whisperer’. You never hear him raise his voice. He’s always right up next to them (Quarterbacks) in their ear, but he’s saying something that means something,” Streety said.

Streety said, “He is, without a doubt, the best trainer of Quarterbacks that I have ever seen. He is a fundamental guy. He is a guy that spends countless hours figuring out a way to make our guys better. He spends a lot of time in meetings with them. I don’t know of anybody more passionate about their job than Danny Aguilar is in Training Quarterbacks.” Given Streety’s stature and experience, that’s mighty flattering.

Aguilar was under Texas A & M-Kingsville Coach Ron Harms for three seasons, 1994-96, when the Javelinas were ranked among the best in NCAA Division II. “Coaching under Ron Harms, inductee to numerous Hall of Fame honors, was very special in my career,” Aguilar said. Coach Harms recalled Aguilar’s thoroughness as a Quarterback Coach. “He was a perfectionist in respect to Quarterback mechanics. It was really a blessing for him to have been here to teach Quarterbacks the kind of things they needed to be taught. I had a lot of confidence in him to teach the right things to the guys. He was a real good, quiet and unassuming guy but was also very, very demanding.”

Aguilar is such a student of the Quarterback position that he was a guest for an entire week at a Quarterback Camp conducted by Tom Martinez in San Mateo, California, two summers ago. Coach Martinez coached and has mentored New England Patriots Quarterback Tom Brady for years. He has been his personal throwing coach since Brady was 13 years old, and continues to work with him every off-season, to clean up his mechanics. “It was a tremendous experience to be around Tom Martinez, for an entire week,” Aguilar said.

Aguilar said, “Coaching Quarterbacks for me, centers around having a strong work-ethic, because if you work hard, good things will happen. First of all, I want Quarterbacks to know what it is to work hard. They not only need to have a passion to play Quarterback, but they’ve got to have a passion for working hard. It involves a tremendous investment. You have to sacrifice to be a complete Quarterback. I want relentless workers. You can only build instinct through repetition. You are what you do every day. Coaching Quarterbacks bleeds into every phase of my life. I try to take that work ethic into everything I do.”

Justin Jones, a former Quarterback, said, “Aguilar is as much a mentor, as he is a Quarterback Coach. He teaches his Quarterbacks as much about life, as he does the intricacies of the Quarterback position. To him, it goes hand in hand. If something goes wrong, he says to maintain your focus and work through the difficulties in your life. He says that it’s going to happen in your life, and that you just don’t really realize how strong you are, until being strong is the only choice you have.”

Coach Aguilar’s sincere commitment to kids is truly remarkable. He has developed a system for training Quarterbacks that is the best I’ve seen. If you are serious about being the best Quarterback you can be, then this camp is a must for you. If I could send our Quarterbacks to only one camp, it would be this one.

Coach Aguilar is one of the finest Quarterback coaches in the State of Texas. He has continued studying Quarterback play and development for over 30 years. He offers a wealth of knowledge, countless drills, and quality instruction. Being a former Quarterback under him, I know first hand that Coach Aguilar is a tireless worker with very high expectations that demands the same from his Quarterback’s – and that is probably an understatement of considerable magnitude. He coaches Quarterbacks with heart and passion and with not much sleep. The bottom line is that Coach Aguilar knows how to reach Quarterbacks, how to keep their attention and keep them motivated 365 days a year. It’s all about coaching Quarterbacks and nothing else. He loves coaching them and to him, it is virtually an end in itself. He wants to bring his Quarterbacks to the highest level of preparedness and hand them an edge.

The best thing about Coach Aguilar’s camp is that it is a learning camp. So often now we hear that camps are fun and games. This camp is for the serious Quarterback. The athletes will get the training and the skills needed to develop into today’s Quarterback. 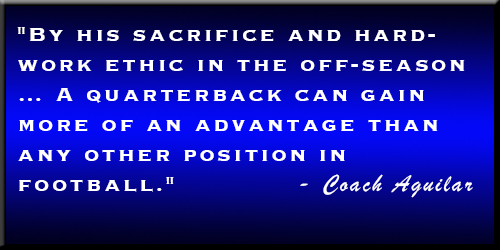